Side observation about me and blogging…apparently it’s a procrastination tool, and not something I do when I have free time, given that I have had nothing but free time for the past two weeks, since I’m home on Christmas break, and yet I have not written a thing. One of the things I meant to do was change my music to Christmas music. That has now been done. Not a whole lot of variety of Christmas music; just what I had on hand.

But since we’re speaking of Christmas music, time to plug my very favoritest Christmas CD ever. It’s by a Contemporary Christian group called Point of Grace. I don’t listen to much Contemporary Christian music (I have some sort of mental block against it, although I couldn’t pinpoint the exact source of this mental block–it makes little logical sense, but I think it has something to do with a distaste for the creation of a separate-but-imitative “Christian” pop culture), but somehow I came across Point of Grace, a group of four female singers who specialize in Christian pop with close harmony. Most of their albums are good-but-not-great, but A Christmas Story (not to be confused with A Christmas Story) is consistently the Christmas album I listen to over and over every year. 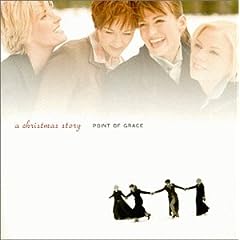 The disc is a mixture of original songs, hymns, traditional carols, and secular Christmas standards. I think that’s what I like the most about it…the hymns and spiritual songs take on an additional weight because you know that the group really believes them (unlike many current Christmas albums), yet they aren’t put off by including purely secular songs like “Santa Claus is Coming to Town,” as you might expect a Christian group to be. They have a very Andrews Sisters sound on some of the popular choices, which works really well, and the sense of orchestration and depth on the hymns, not to mention the excellent mixture of multiple songs together on many tracks all add up to a CD that I can’t listen to just once. Many of the tracks are in the current mix on the music player in my sidebar. Here’s a few of my absolute faves in-post, since I haven’t taken time to hack my sidebar enough to make the music player show on a single-post page.

The other major album in the sidebar player is Sarah McLachlan’s new Christmas album, Wintersong. She’s one of my favorite singers ever, and though she’s not a Christian (so far as I know…certainly some of her earlier songs would argue against it), her versions of many of my favorite Christmas songs are be-gorgeous. I’m particularly partial to the exotic “The First Noel/Mary Mary” and the ethereal “Silent Night.” And of course, the version of “God Rest Ye Merry Gentlemen” that she did with the Barenaked Ladies three or four (or five or six?!) years ago remains a favorite, though she didn’t include it on the new CD. (I think it was on the Barenaked Ladies’ Christmas CD back then, so perhaps it would have been thought redundant.)

So there’s my contribution to the Christmas spirit. ;)